History of Belted Galloways in Australia

The Belted Galloway breed (the 'Beltie') started and was developed in the austere hill country in the Galloway area of south-west Scotland and is believed to have originated more than 300 years ago - the result of crossing Galloway cattle with Dutch Lakenvelder (a horned, dairy breed).

The Beltie is a naturally polled (hornless) animal, and the distinctive 'belt' markings are also dominant. Of significance to Australian farmers is their ability to produce beef economically under tough conditions. Historically, these cattle were not shedded in the Scottish winters, and thus they have evolved into a hardy, adaptable breed with good foraging ability, easy calving and the capacity to thrive in conditions where other breeds struggle.

The cows are long lived, and are known to produce live calves into their late old age. The Beltie mother is renowned for her mothering ability, and produces a very rich milk supply which produces a well-grown calf at weaning time. Calves are small at birth, which ensures easy calving, but 'grow like mushrooms' with the good milk supply.

The Beltie produces high quality beef, which is lean and tasty. The meat is nicely marbled, but is otherwise lower in superfluous fat. This ensures that the carcass cuts out at an economical rate - up to 62%.

The Beltie has a magnificent winter coat, which comprises a double layer of hair to give excellent insulation from the cold. There is a long 'overcoat' which readily sheds the rain and snow and helps keep the animal dry, and a very soft, mossy 'undercoat' which traps the warmth and gives the Beltie the ability to maintain its body weight with 20 - 25% less food intake in cold weather. In hot weather, the coat is shed to a fine cover of hair. The hide, in its full winter glory, is particularly attractive, and is sought after as a hard wearing floor rug and definite conversation piece.

Belted Galloways were introduced into Australia in 1973 from New Zealand, with the registered Belties being imported in 1973. Sir Reginald Reed of the 'Mt Wayo' stud in NSW brought three bulls and six females from New Zealand. During the next eight years some fifty head of registered cattle were brought to Australia. Belted Galloways were first allowed into the Australian herd books in 1976. 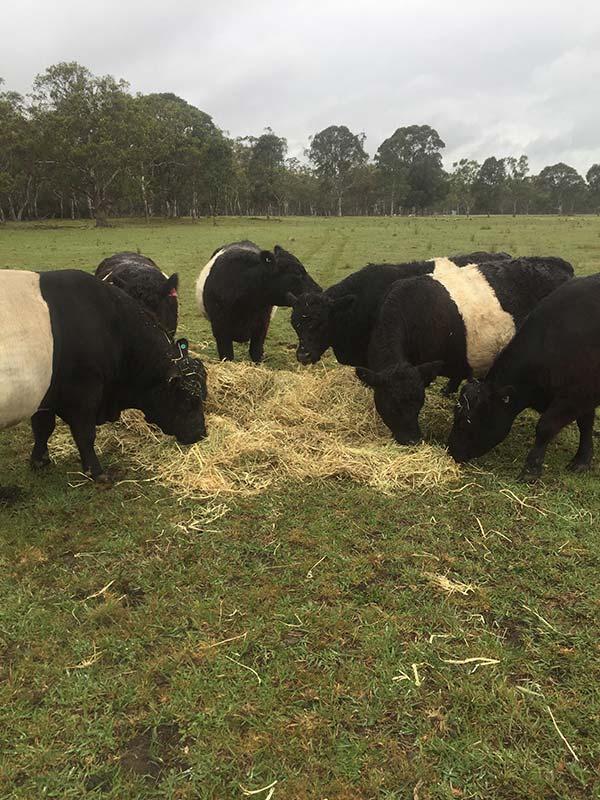